A Leap of Faith

A Leap of Faith 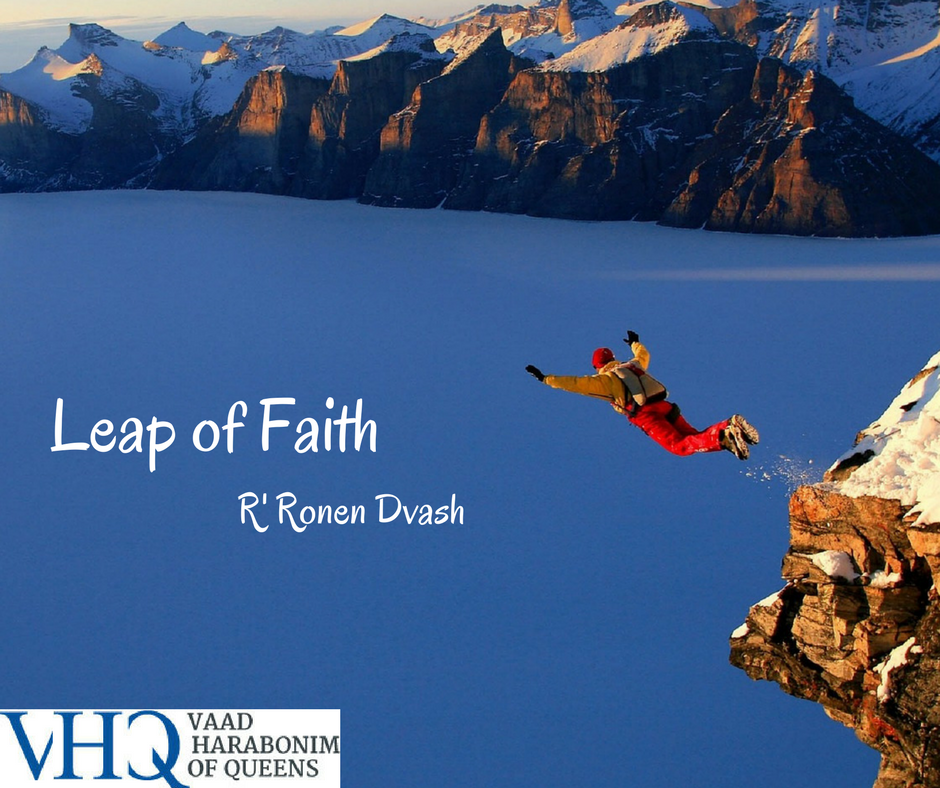 A significant part of Parshas Vayishlach is dedicated to the meeting between Yaakov and Eisav.  The Torah (32:8) records Yaakov Avinu’s reaction to Eisav’s immanent approach as being scared and fearful.  The Gemara (Brachos 4a) questions that why was Yaakov afraid of his brother Eisav, didn’t Hashem already promise Yaakov Avinu, as stated in last weeks Parsha (28:15), that “Behlod, I am with you, and shall protect you in all that you do”?  The Gemara answers that Yaakov was afraid that perhaps he sinned and was no longer worthy of Divine protection.

The Rambam (introduction to Mishna) discusses the Gemara (Brachos 7a) which states that Hashem will never retract from a Nevuah (prophecy) which foretells of good events.  Yet if a Nevuah tells of bad tidings, then Hashem allows for such a Nevuah to be withheld.  Based on this, The Rambam is bothered, why was Yaakov afraid, didn’t Hashem promise Yaakov protection?  The Rambam suggests that when the Gemara stated that a good Nevuah is not retracted, that would only be when the Nevuah was for Bnei Yisroel as a whole, yet to a single person, sin may cause a Divine promise to be withheld.

We find however, what seems to be a contradiction in the Rambam.  In his introduction to his commentary to Avos (Shemona Prakim Chapter 7) the Rambam discusses the prerequisites to attain a prophecy.  The Rambam notes that in order to attain Prophecy one need not be perfect as is evident from Yaakov who sinned for being fearful.  This statement of the Rambam which claims that Yaakov sinned for being fearful seems to contradict the previous Rambam which stated that a private Nevuah may be withheld and thus justifying Yaakovs fearful response?

My Rosh HaYeshiva, Rabbi Yonason Sacks Shlit”a cited the following a resolution from Rav Elchanan Wasserman ZT”L.  The passuk in Tehillim (118:9) says “It is better Lachsos to (trust) Hashem then it is Livtoach (trust) in man”.  The words Lachsos and Livtoach mean trust, yet the Gr”a (Mishlei Ch. 14) suggests a fundamental difference.  Livtoach, whose root is Bitachon means to trust in someone who has promised you something (e.g. a King promises someone riches).  Yet, Lachsos, whose root is Chisayon means reliance even without a promise.  The passuk therefore states that it is better to rely on Hashem even in a situation where He does not state an explicit promise of salvation, then a human who does promise protection.

With this in mind we can resolve the above contradiction as follows.  While Yaakov’s being afraid even with a individual promise for good may be justified due to fear of sin, yet Yaakov, according to his stature, should have exercised Chisayon, relying even without a promise and thus not express any fear.  While Hashem may not have the same expectations from us as He did from Yaakov, I would suggest though that often we’re faced with times that require us to take a “leap of faith”.  And as mentioned above, Chisayon, reliance even without a formal declaration from Hashem is greater and guaranteed, than from assurance of man which is not.

If we can strengthen ourselves to trust in Hashem even when times are stressful and tough, then iy”H, Hashem will reciprocate with good tidings and thus leave us with no reason to fear.